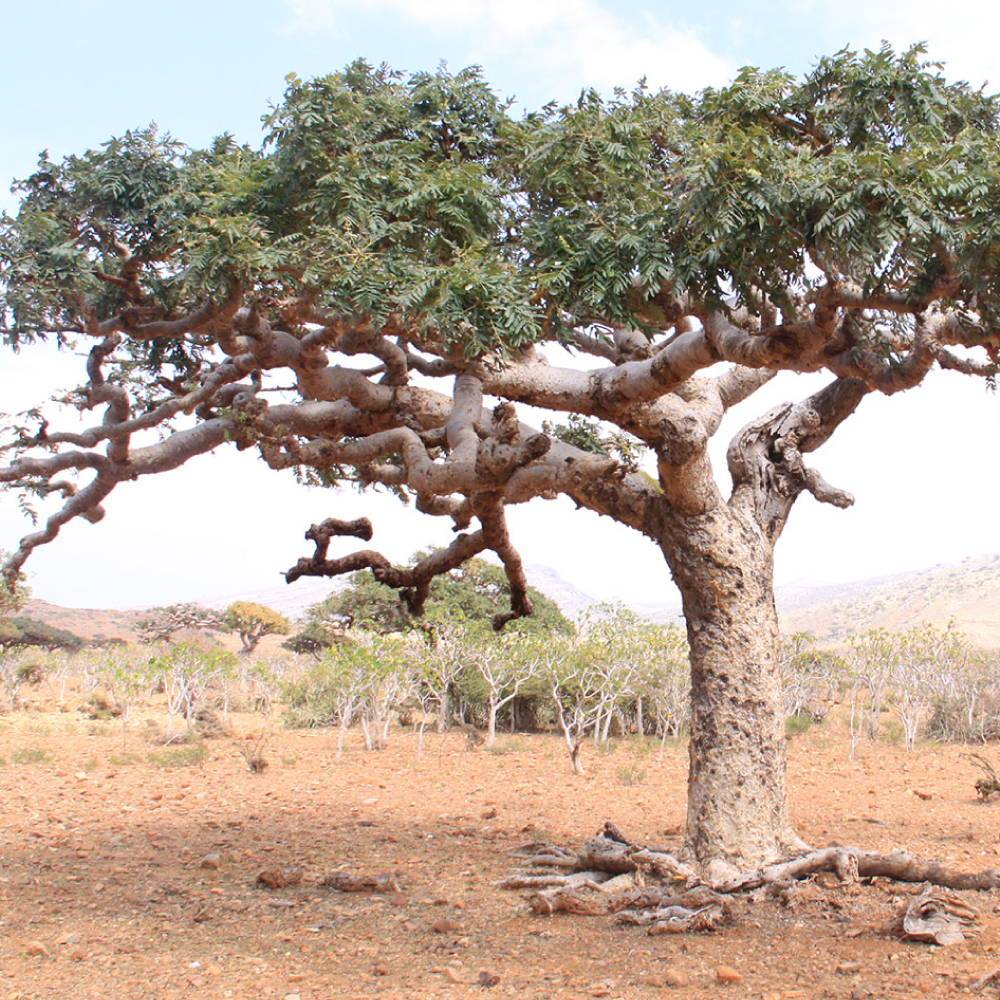 The scent of Frankincense inspires one to reach one?s highest spiritual potential. It is said to accelerate spiritual growth.

The Boswellia group of trees consists of some 20 species found in the dry tropical areas of N.E Africa and Asia. When the tree is cut, it exudes a milky liquid that solidifies to an amber oleo-resin/gum that is collected for steam distillation. There is a difference with B.carterii as it is a different tree with a slight variant in odour and possible colour, due to geographical locations, environment, and different requirements of each species.

Frankincense (old French for “franc encens” – High quality incense) is better known for this wondrous incense. The specific name, “serrata”, comes from serra (meaning – a saw) referring to the toothed leaf?- margins. A traditional Ayurvedic medicine, due to it’s natural location of India and the Punjab region that extends to Pakistan, is also suggested as Indian Frankincense.?It has been used since ancient times in rituals and spirituality, it is still used as an incense in many religions today.

The oleo resin is collected from the bark of this?moderately sized shrub/tree of about 9 – 15 metres, is a deciduous tree with a light, slightly drooping, and spreading crown. In India, white flowers appear at the ends of the branches by late January to March/April. Followed by fruit, that ripen in May – June. The leaves turn from green to yellow to a light brown before they all nearly fall by the end of the year, which new leaves will start to emerge in May/June the following year.

Frankincense Serrata is an Indian species of Frankincense used for thousands of years for treating arthritis. The key anti-inflammatory and pain relieving actives within the Frankincenseare thought to be the Boswellic acids. Frankincense is a beautifully gentle oil but it is recommended that it is avoided during pregnancy due to the fact that it has been traditionally used to induce mensturation. However, research into its use in pregnancy is limited.

Frankincense is also known as Olibanum.

Frankincense is useful for respiratory conditions, such as asthma, congestion, catarrh, coughs and laryngitis, also to improve the immune system against the common cold and flu, even mouth ulcers. It can also help with easing the nervous system, especially in times of nervous tension, stress and anxiety, and to encourage meditation. Useful in skin-care, as it helps to balance minor irritated skin conditions, such as blemishes, scars, minor wounds, wrinkles, assisting dry and mature skin. Some clinical studies of osteeoarthiritis and joint movement /function have indicated some improvements of pain and mobility.

Frankincense emitted a fragrant odour, and the incense was regarded as offerings and an emblem of prayer, therefore symbolising a Holy Oil.