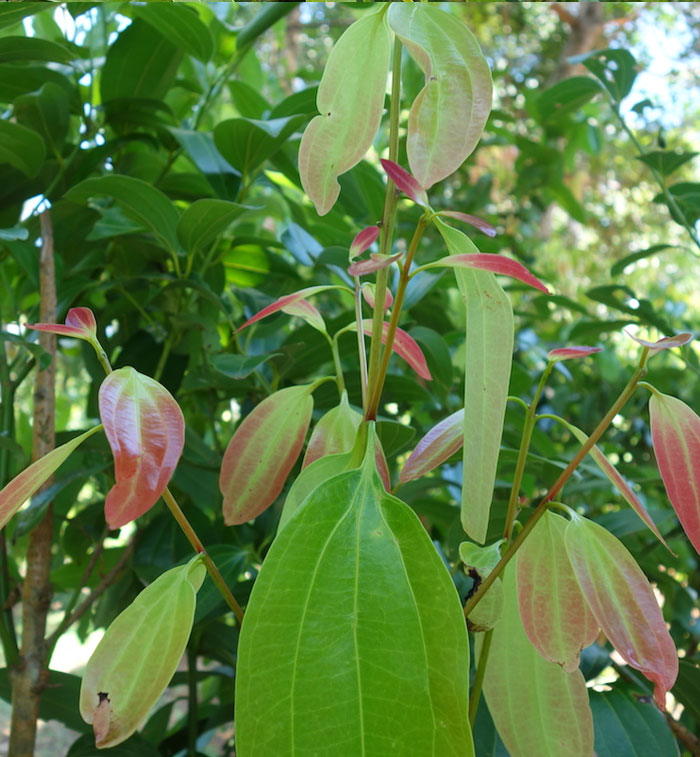 An evergreen tree, native to Sri Lanka. Wild trees may reach 20 metres in height, whilst cultivated trees for Bark oil are grown to around 8 metres. For leaf cultivation, the continual removal of shoots by cropping the young tree to almost ground level results in the formation of a dense bush to around 2 – 2.5 metres high with ample leaves and shoots. After trimming and pruning, the leaves left behind from the cutting of the stems, are usually allowed to dry for a few days before distillation.

The leaves are collected and laid in piles along two ropes. These ropes are then used to roll the leaves into bundles which are carried out of the plantation by workers on foot. The bundles are transported to the still, where they are placed into the vats for distillation. Once the leaves have been distilled – they are left to dry, and then used as fuel in the furnace for the next distillation. This regular maintenance provides the basis of raw material for the production of Cinnamon Leaf oil. The Leaf oil has a more gentler effect than that of the Bark oil. This is due to the leaf oil having a higher content of eugenol.

The oil and spice is often confused with Cassia, as they have similar properties and aromas. Cinnamon was prescribed by the ancient Chinese for almost every malady, and was used by the ancient Egyptians for keeping epidemics at bay.

Cinnamon oil is beneficial for the respiratory tract, rheumatism, arthritis and general pains. It calms an exhausted feeling of depression, tones the whole body and stimulates the glandular system, thus easing period pains. Cinnamon oil’s benefit lies in its toning and calming effect in the easing of colds and influenza, as well as period pains and menstrual problems, stimulates contractions during child birth. Helps with calming the digestive system, like diarrhoea, dyspepsia, intestinal infection, underperforming digestion and spasm. Although traditionally used for clearing warts, lice, scabies, tooth and gum care, and insect stings. ** Please Use at <1% for application to skin (Take care due to the skin irritation factor).

Cinnamon oil also acts as a tonic to the mind and body, reducing drowsiness and bringing a welcome boost to flagging energy levels if you are suffering from exhaustion or burn-out. For an instant ?pick-me-up? blend it with ginger and lemon essential oils. Its stimulating action also makes it an effective essential oil for boosting or maintaining the immune system.