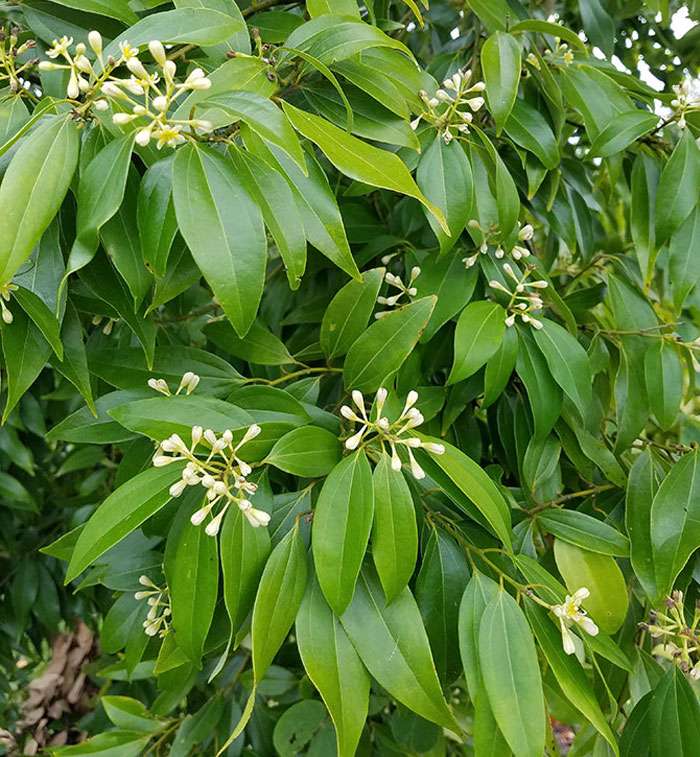 An evergreen tree of approximate height of 10-15 metres, with leathery stiff elongated leaves. The best and most desired bark is collected on a juvenile tree that has red leafed tips. The flower is a delicate white with a pale yellow centre, that then produce fruit about the size of a small olive. The trees have a tendency to spring new shoots from the roots, and are at their peak of perfection at the age of 10-12 years. Other names it is known by are Chinese Cinnamon Oil and Chinese Cassia.

Cassia shares the same botanical family as the Cinnamon, which both have the essential oil made from the outer trunk of the tree. Cassia sticks can be distinguished from their cousin Cinnamon quite easily, as the bark roll differs. Cinnamon has a layered, multiple curls, whilst Cassia has normally the one (1) thick layer roll, that is coarser, darker, and duller. The bark is collected for steam distillation, and the wood without the bark is odourless and is used as fuel.

Mostly used as a domestic spice, it is also used as a flavouring component for confectionery, desserts, pastries and meat. With some pharmaceutical applications such as mouthwashes, toothpastes, and gargles. While sharing similar traits medicinally with the Cinnamon, Cassia predominantly aids in the digestive complaints of flatulence, diarrhea, nausea, colic, vomiting, menstrual complaints, and also headaches and the common cold.

Cassia oil has a strong and inviting odour, mainly a top note. Cassia contains 1 to 2 volatile oil cassia oil, which is mainly responsible for the spicy aroma and taste it is used as a flavouring in some products among other things it arguably has a more mouthwatery odour than cinnamon leaf. It has a very high content of cinnamic aldehyde, up to 90% in high quality oils, which is a well-known dermal irritant. It is not recommended for use in skin products and we suggest you handle it using protective gloves.

Not recommended for use during pregnancy.

Cassia is a tonic, carminative and stimulant. Cassia predominantly aids in the digestive complaints of flatulence, diarrhea, nausea, colic, vomiting, menstrual complaints, and also headaches and the common cold.